1,2,3,7: The Clavicula of our Simulation, Gematria and Katapayadi


In previous posts I have already shown that the number 273 seems to be a peculiar constant related to our Solar system, temperature and procreation. This number shows up so often that it is nearly impossible that this could be a coincidence. Rather it seems to be a kind of message from a higher intelligence who therewith announces its presence. In my philosophy of pancomputational panpsychism this implies, that we are living in a simulation.

In the present article I will go a bit deeper into the numerical signature which seems to be some kind of key, a clavicula, to decode the message of our simulators.

Let me first summarise my previous findings to numbers containing the sequence of the ciphers 2,7 and 3:

7.      The Moon controls the movement of water around the Earth, ebb and flow. When water is consequently set as the standard for measuring temperature, Absolute Zero, the temperature at which all atomic movement comes to an absolute halt, is -273.2° C.
8.      According to the experiments of Gay-Lussac, when a gas is either heated or cooled by 1 degree Centigrade, it expands or contracts respectively by 1/273.2 of its previous volume.
9.      The triple point of water is defined to take place at 273.16 K.
10.  The Cosmic Background Radiation is 2.73 K.

11.  All medical students are required to memorize that a pregnancy (read: life developing in water) is calculated on the basis of a 10-sidereal month period of 273 days from conception to birth, which is 9 “regular” months. 27 divided by 3 gives 9.
12.  A woman’s menstrual cycle is on average 27.3 days.

13.  If a circle is drawn with a radius from the centre of the Earth through the centre of the Moon, the perimeter of the square around the Earth and this circle are one and the same! It also reveals how the Moon and the Earth have resolved the puzzle of the squaring of the circle. In other words, if the Moon could roll around the Earth, the circle made by its centre has a circumference precisely equal to the perimeter of a square around the Earth (when Pi is approximated by its ancient, traditional ratio of 22/7 = 3.14). Comparing a square’s perimeter to a circle having an equal circumference, the circle’s diameter is 27.3% longer than the edge of the square. Inscribe a circle inside a square.
14.   The four corners make up 27.32% of the total area.

Another important constant we encounter in physics is the fine structure constant of Hydrogen, alpha (0.0073), in which we encounter again two of the digits of 273.
1/alpha =137.  The scientist Pauli was obsessed with the archetypical meaning of numbers in particular number 137, which  unintendedly also turned out to be the number of the room in which he died. A Synchronicity. Pauli shared his fascination for numbers and in particular 137 with the psychologist Jung, who is the conceptual father of the notions archetype and synchronicity. Note that our universe is said to exist 13,7 billion years.

37 is not only an octagonal number, it is also both a hexagonal number and a hexagram number. Thus it is the first trifigurate number. Its inverse 73 is a hexagram or Star number as well with the 37 hexagon inside. 13 is the first hexagram, with a core of 7 spheres. Again we see the 1,3 and 7. 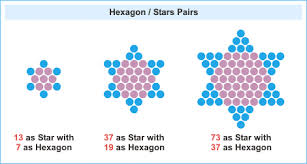 Due to its relation with the so-called “number of the Beast” (666=18x37) from revelation 13:18, the Bible fanatics are fond of finding all kind of relations with 37. Noteworthy, 137 is the 33rd prime number, 33 is related to the length of life of Jesus in years.
The word Kabbalah has a Gematria value of 137. The number 6 is used 273 times in the Bible.

The most elaborate and impressive collection thereof can be found on the so-called “Biblewheel” site (http://www.biblewheel.com//GR/GR_37.php).

Religious occultism is fond of “Gematria”. Gematria assigns values to each letter of a word and by adding those gives the Gematria value of a word. Words with the same or similar Gematria value are considered to bear a strong relation. It is permissible to add or subtract the value of one Aleph (1) in order to still have a related meaning. Thus the Gematria of the name of God in Hebrew (YHWH), which is 26 is related to 27. The perfect number 28 (i.e. it is the sum of its divisors) is also related to 27. Interestingly 137x2=274, which is therefore Gematrically identical to 273.
Interestingly the Gematria value of the Greek “he kleis” (the key) is 273. This is also the value of “klesis” (calling) and “hiram abiff”, the all-seeing eye. The Hebrew Gematria value of the Greek word “Gematria” is 273.

Likewise interesting is the suggestion by the Biblewheel, that the first verse of Genesis (the Gematria of which yields 2701=37x73) is a “Creation holograph”. 37 is also the value of the gematria of the word of God.
The author of the “Biblewheel” first went berserk in a kind of Apotheosis-singularity experience, in which every gematrical relation fitted in a beautiful scheme and then himself started to debunk his findings in his dark night of the Soul being lost in the quagmire of agnosticism.

In my book Technovedanta 2.0, I show that other religions made similar claims: Hinduism claims the first verse of the Rg Veda to be a creation holograph, Islam does the same with the first verse of the Qu’ran. These religions also have their variants of Gematria. The Hindu shloka (verse) gopiibhaagya madhuvraataH shruMgashodadhi saMdhigaH .
khalajiivitakhaataava galahaalaa rasaMdharaH
encodes pi up to 31 decimal places.

Because these religions also have their own Gematria system (called Katapayadi in Hinduism and Abjad in Islam), with equally impressive results and because these different religions contradict each other, it cannot be so that they all represent the word of God (which they claim), in an equally truthful manner. Thus unlike these religious zealots, I do not conclude the correctness of a religion based on its impressive Gematria results. In Technovedanta I argue that the writers of these books were perhaps telepathically influenced (in a manner unknown to themselves) by entities from a higher intelligence or even higher dimension (our simulators?).

The agenda of these entities is not necessarily benign. Although they give numerical clues and keys about the simulated structure of our universe, they have also created a great deal of confusion and suffering, by being the instigators of the mutual oppositions of the different opposing religious factions. Therefore we cannot rely on the moral prescriptions of these religious books, but we can use them in our deciphering of the key to the ontogenesis of our universe.

At least it is worthwhile further figuring out how these values relate to physical processes and constants in order to increase our Technological dominion over physicality – which in panpsychic terms means to subdue the lesser spirits of Solomon’s Goetia. But if we truly crack this code, we may even be able to connect with our simulators and commune with the greater spirits of Solomon’s Theurgia. Or I am now venturing into the realm of Satan’s pride, wishing to be “K’Elohim”, “like the Gods”, which terminology has a Gematria value of 666.

Personally, I think that if the Gods or simulators put so much effort in devising such an encryption, which they knew would be deciphered one day, they also meant it to be so. It seems to me that then it is also their wish that we become like them, without there being any animosity or wrathfulness, because we would have been too “proud”, too audacious to venture in their realm. 1,2,3,7 is not a forbidden fruit. It is not the tower of Babel. It is our rightful heritage to become K’Elohim.
Posted by Technovedanta at 08:12:00